Now that I’m locked inside me HQ because of the bad weather, it’s time to look back on me favourite racing event of this season: Rally TT VODAFONE Estoril – Marrakech which was a part of the FIA World Cup for Cross Country Rallies. In the original they had “Estoril – Portimão – Marrakech” but the guys doing only Estoril to Portimão part were competing in the national Portuguese championship.

I was able to appear at the opening ceremony in front of the Estoril Casino gardens – a lovely location by all standards. The aforementioned event took place in June but it was a really good day for shooting photographs; the sun wasn’t interfering too much, so the lighting was perfect. I went a bit too far with Chrome mode I think but I kinda like the “glossy” feel it gives to the photos. Besides, I like to portray the atmosphere in the first place.

The cars were real monsters, especially that massive Chevy truck from Vigouroux Chevrolet driven by its owner Eric Vigouroux. It really caught my attention. BMW cars were not bad, quite funky and looking a lot better than their respective road versions. I had a quick word with Leonid Novitskiy who is the leading man in the championship. The drivers were friendly; I mean even F1 drivers are quite friendly these days but in case of rallying you get more access to things and there are no mechanics covering various car parts with their bodies. CCR cars weren’t going anywhere which allowed me to take decent shots; later on, during the ceremonial start, I added more material to my CCR portfolio.

Journalists could travel with the organisation (for a bit of money) and cover the rally live but I was slightly busy with me boring job and couldn’t afford that luxury. Maybe next year… 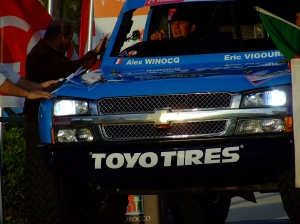