Tony Hall of Fame on iberianmph dot com just won’t slow down! It’s 2009 all over again baby! World Series by Renault in its previous form with Renault F1 Team’s demo runs was amazing!

We can tell you it was extremely relaxed back in 2000s, to the point where they’d allow you to sit in the actual F1 demo car or hold a real F1 steering wheel. Now we have to keep up with the Alguersuaris and Renault Sport as two separate entities; “Heime” is no longer a race car driver, he prefers to abuse his fancy turntables. The only constant in the story below is Carlin, how does Trevor have time/”muny” to compete in every corner of the world? Hats off to TC!

Well, at least “le Costcutter”, the ghostly Mr Ghosn, said yes to Formula 1. Maybe in 2019 it will all go back to normal: Greg Mansell II Jr and Jaime Alguersuari III Jr fighting for the reunited WSR championship at ageing MotorLand, with fat bald Fernando Alonso doing demo runs in the R26…

My trip started on Friday afternoon, I left home around 4.00pm to drive the 370 km to a small village about 30 km from the new race circuit at Alcañiz here in Spain. I arrived just after 7.00pm as dusk was setting in. My hotel was in a small mountain village called Monroyo and only 38 km from MotorLand.

The next morning I was up at 6.30 am and down to the restaurant for a coffee. To my surprise, there were quite a few people from the International Draco Racing team in the restaurant, including the recent winner of the World Series by Renault Bertrand Baguette and his team mate Marco Barba. What a small world, eh?

For those interested, the track was designed by Hermann Tilke. He has also been involved in the design of Sepang, Bahrain, Shanghai, Istanbul and Fuji. His technical and sporting consultant was Pedro de la Rosa. The track, completed in September, is 5238 meters long and has a straight boasting some 1700 meters. It reminded me of Barcelona in 1991 when the first F1 race was held. The track and paddock were finished but hardly anything else.

It was 8.30 am when I entered the paddock area. Camera in hand, I was in my element. The boxes were all allocated to the WSR and the Eurocup Mégane Trophy teams. The rest of the paddock housed the Eurocup Formula 2.0 teams plus of course all the teams’ lorries and hospitality areas. In addition, Renault had a selection of exhibitions which included the Renault F1 show team and a collection of new and historic vehicles a couple of which were over 100 years old.

As I was only there for the day, I had to do as much as I could so I had no time to waste. First I had a look at the collection of historic cars. I was then off to the boxes of Draco Racing for a look at their cars before qualifying.

The first sessions of the morning were qualifying for the Eurocup Renault 2.0, followed by qualifying of Renault World series.

The Renault F1 show had two R28s for the public to see and have their pictures taken. I had to be one of those. I was fortunate to be invited into the Renault F1 camp. I was shown the cars and met Lucas di Grassi and other members of the team. The car he would drive was the R28 chassis 5. I was given a communications headset and when it came time for the Renault F1 show, the R28 was wheeled to the pit lane and prepared for Lucas who would do 3 laps of the circuit and then stop on the start/finish line and do a doughnut.

I was in my element, pit lane, fast car, the only thing missing was me being given the opportunity to drive the car (can always dream). This was the first time that an F1 car had been driven on this new circuit. I knew the 3.5 litre WSR cars were doing a lap time of 1’44 in qualifying. Lucas, who had not driven on the track before, managed a time of 1’38.

In the list of drivers I saw the name Greg Mansell, son of Nigel Mansell, OBE, who won the F1 World Drivers’ Championship for Williams back in 1992. I made my way down to the Comtec pit area and met Nigel Mansell together with his wife. He was there to support his son Greg. I last met Mansell at the Michigan Speedway in the USA back in 1993 when he was racing in the Indy series. Nigel Mansell had a great F1 career and won a total of 31 GPs and drove for Williams, Ferrari, Lotus & McLaren. Oh how I remember September 1991 standing at the end of the straight at the Spanish Grand Prix watch Mansell and Senna just inches apart. Gone was the famous moustache but it was still the same guy.  He was always ‘fan-friendly’ and we had a chat for a few minutes about old times.

I also met up with F1 driver Jaime Alguersuari who was competing for the Carlin Motorsport team. Being a Spanish driver and in Spain, there were the obligatory crowds around his motor home but he was very good with all of them. Clearly, Jaime has been very busy these last few months due to competing in Formula One and the World Series by Renault.

The feeling from the drivers that I spoke to was that the new Motorland track was excellent to drive on. Although it was new and lacked grip it was getting better and was fun and fast. I am sure we will hear more about it and that various motorsport formulae will race there in the future.

Obviously, I had a fantastic day. I would like to say a special thanks to the Renault F1 Team for allowing me to follow their F1 exhibition at Motorland Alcañiz and for their hospitality. 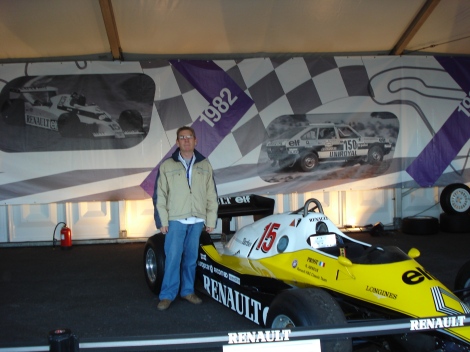 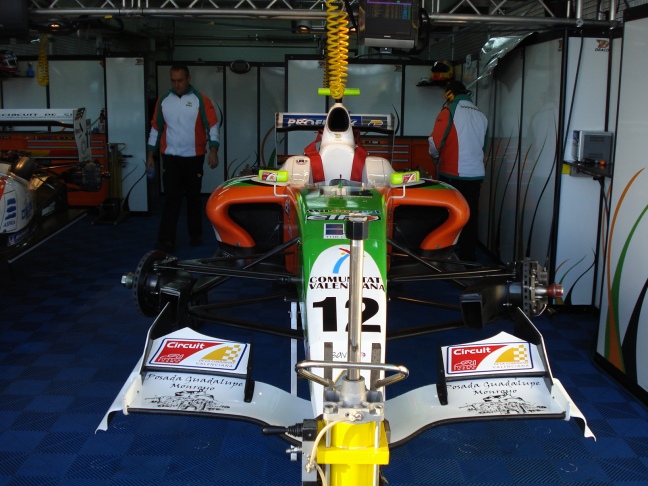