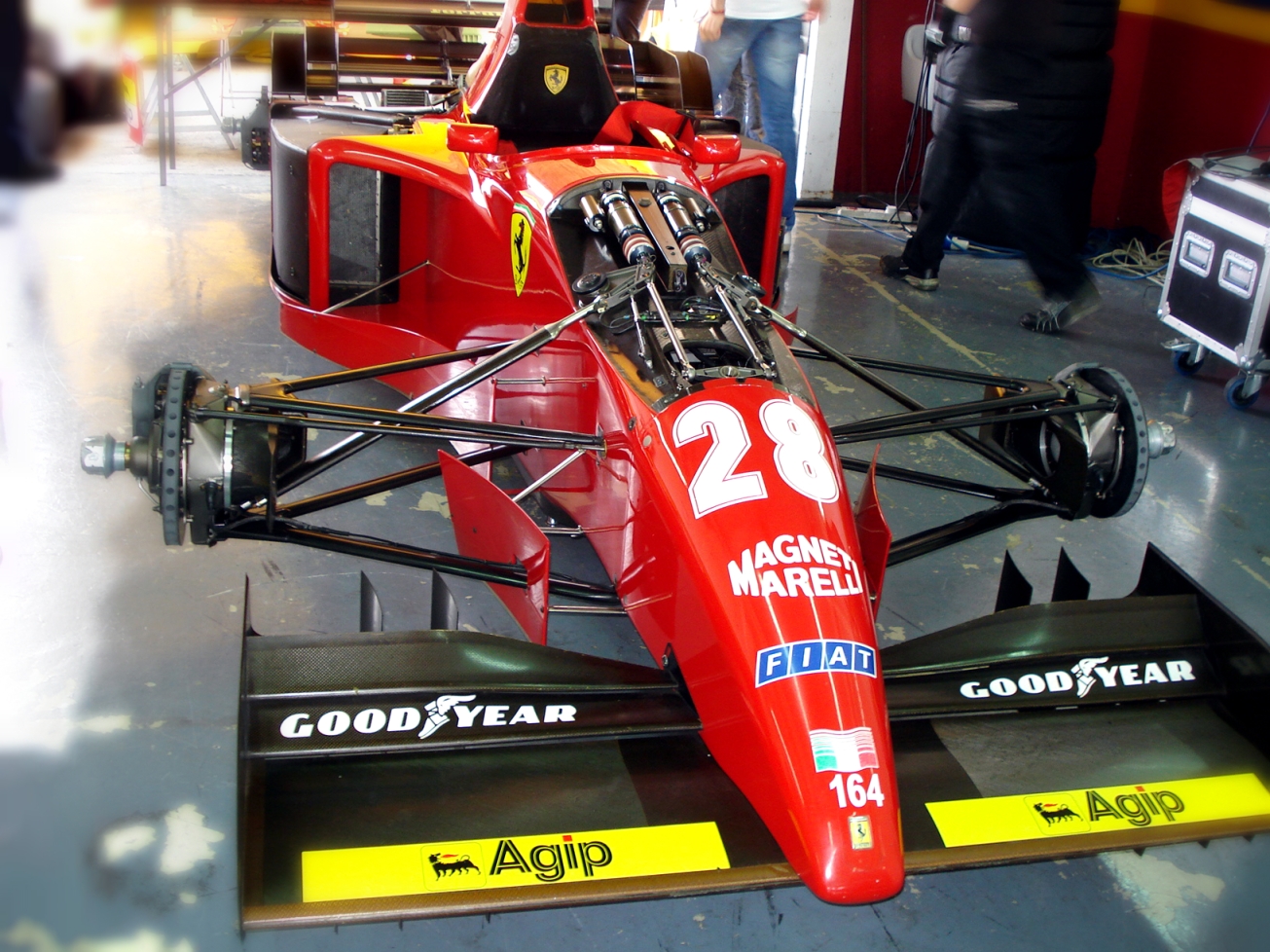 Tony Hall of Fame on iberianmph dot com continues… Funny how time flies: at the end of 2009 Alonso was poised to win the world title with Ferrari sooner rather than later (according to the ever-present F1 pundits); Jean took over from Max; the word ‘FOTA’ meant something; Montezemolo was having fun and Fisi was fresh from his last podium in F1. Jenson was the reigning champ and Schumi could walk and talk – #keepfightingmichael

I like going to the race circuit at Ricardo Tormo in Valencia as it is only a one hour drive from home. As far as I know, this was the first time that the Ferrari World Finals has been held outside of Italy since its inception back in 1994. There had to be a reason for this so what on earth could that be?? Then it came to me ….. of course, the signing of none other than Fernando Alonso.

For me this was going to be a first, I mean going to an all-Ferrari event, especially being a Ford owner (word around the campfire is Tony now drives a mighty Rover, one of those big models with a gas-guzzling engine under the bonnet, we approve. – the editor). I left home Saturday morning arriving around 10.00 hrs, access and parking was easy.  Having my entrance pass scanned, I entered the circuit to the beautiful sound of Ferrari F1 cars roaring around the circuit.

Camera in hand I made my way to the paddock and to the garages. What a funny feeling I had. The garage I had entered was lined up with historic Ferrari/Maserati cars, some dating back to 1937 and they were still being raced. The mechanics were busy checking the oil levels and repairing the cars but the strange thing was there was not a computer in sight. These were the cars that true mechanics worked on, ignition systems using coils and regulators, seats and no seat belts and from the driving position being able to see the track below your seat and gearbox. I have to say I just loved being around those cars.

My next treat was to see those new beasts, yes the Ferrari FXX cars. Running with 6262cc, V12, 860 bhp engines these were cars I could only dream about owning or driving. There was apparently only 30 examples of these made (one of which belongs to Michael Schumacher). The cars were not being raced but driven by their owner/drivers for the fun of it. With the two doors open they looked like they could fly.

Going out through pit lane I found myself wandering into the garage of the Ferrari ex-F1 cars. The oldest one I found was the 1990 F190 of Alain Prost but there were also cars of Eddie Irvine, Rubens Barrichello, Gerhard Berger, Jean Alesi and of course Michael Schumacher. They were all gleaming, even those that were being repaired. What fascinated me was how the designs of the cars had changed, for instance the brakes, the radiator layout, the steering wheels and onboard telemetry. I took so many pictures, I was in my element.

At the end of the pit lane were the boxes of the Ferrari F1 team. In the garages were sitting two F60s. Whilst I was there, the team pushed one of the cars out on the pit lane and then set about doing timed pit stops.

Out now into the paddock where the temporary garages had been set up for the Ferrari Challenge cars. This weekend was going to see the World Finals for three different categories, the Europe and North America, the Shell Cup and the Pirelli. As I continued my walk around the paddock I came to park ferme and it reminded me of my stock car racing days back at Hednesford Hills. There were mechanics all over the cars, removing damaged body parts, getting gravel from the brakes and air intakes, there must have been at least 40 guys at work.

Over on the other side of the paddock was a Ferrari stand offering for sale all sorts of Ferrari merchandise and of course there was the obligatory display of a F60. Ferrari really do know how to spend money, eh!! Obviously, between walking the paddock, pit lane and the garage, I went to watch some of the race events but I must admit I really do like being in the garages and pit lane or standing on pit wall with the cars racing past not more than a couple of feet away. What could be better other than driving the cars!!

On Sunday I arrived at the track by 09.00 just as the Ferrari historic cars were to start the first race of the day. Oh, you just have to hear the sounds of those old engines. Still sounding as sweet today as they did 60 years ago.

I was fortunate to have a pass into a hospitality box so I knew the food and drinks would be catered for but first I had to do what was expected of me and that was to find those F1 drivers.

The first one I encountered was Marc Gene who obliged me with the official driver/Tony picture. He told me he was remaining with Ferrari next year and would also be driving a Peugeot in the Le Mans series. The next driver I saw was Fisi, he was in the F1 garage talking with his mechanics. As for getting close to Alonso and Massa, forget it. The barriers and security guards were out in force by the Ferrari F1 motor home. Not even the intrepid Tony was going to get through that lot.

As the day progressed, I escaped to the hospitality box for some relaxation and refreshments. Lucky for me I had my camera in hand because who should come down pit lane but Alonso and Massa. They were sitting on the back of a new Ferrari soft top and who should be driving but none other than the boss ….. yes, Luca di Montezemolo. As I watched, they continued past me and out onto the track. What on earth was Luca doing …. he turned onto the gravel trap at the end of the pit straight and tried to drive the new car towards the public stand in front. Of course we all knew what was going to happen, even if Luca didn’t. Yep, you got it, four wheels in the gravel and ground to a halt.

Having done the lap of honour Luca, together with his drivers of 2010, gave a speech and thanked everyone for being there. After the speeches came the thunderous roar of four F1 cars coming out onto the track. Felipe had made a quick change and was in a F60 for the first time since his accident. I thought he could not test a F1 car as testing was out but then I was reminded that this was not a test but a demonstration …… Ferrari should have thought of that when they wanted to get Schumacher up to speed…. ‘No Mr Mosley, he is not testing the F60 – he is merely giving the fans a demonstration of its capabilities’…

Anyway, Massa and Fisichella were driving the F60s and Badoer and Gene were in the 2008 F1 cars. After a few laps Badoer and Gene came into the pits but waited in the cars whilst Massa and Fisi carried on doing laps. Unfortunately Fisi had a mishap and went off into the gravel and parked his F60. Massa came into the pits and did a quick pit stop and back out and was then joined by Badoer and Gene. To conclude the F1 demonstration, the three cars all stopped on the start/finish line and together did doughnuts or what I called a FERRARI BURNOUT.

I hope you enjoy reading my report and pictures.  Until the next time. 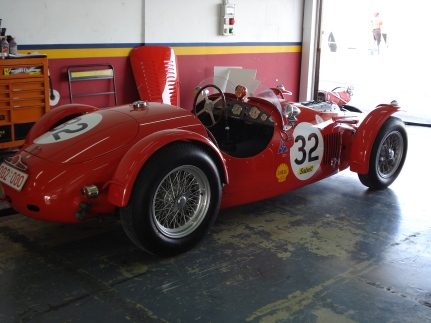 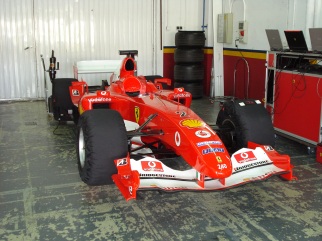