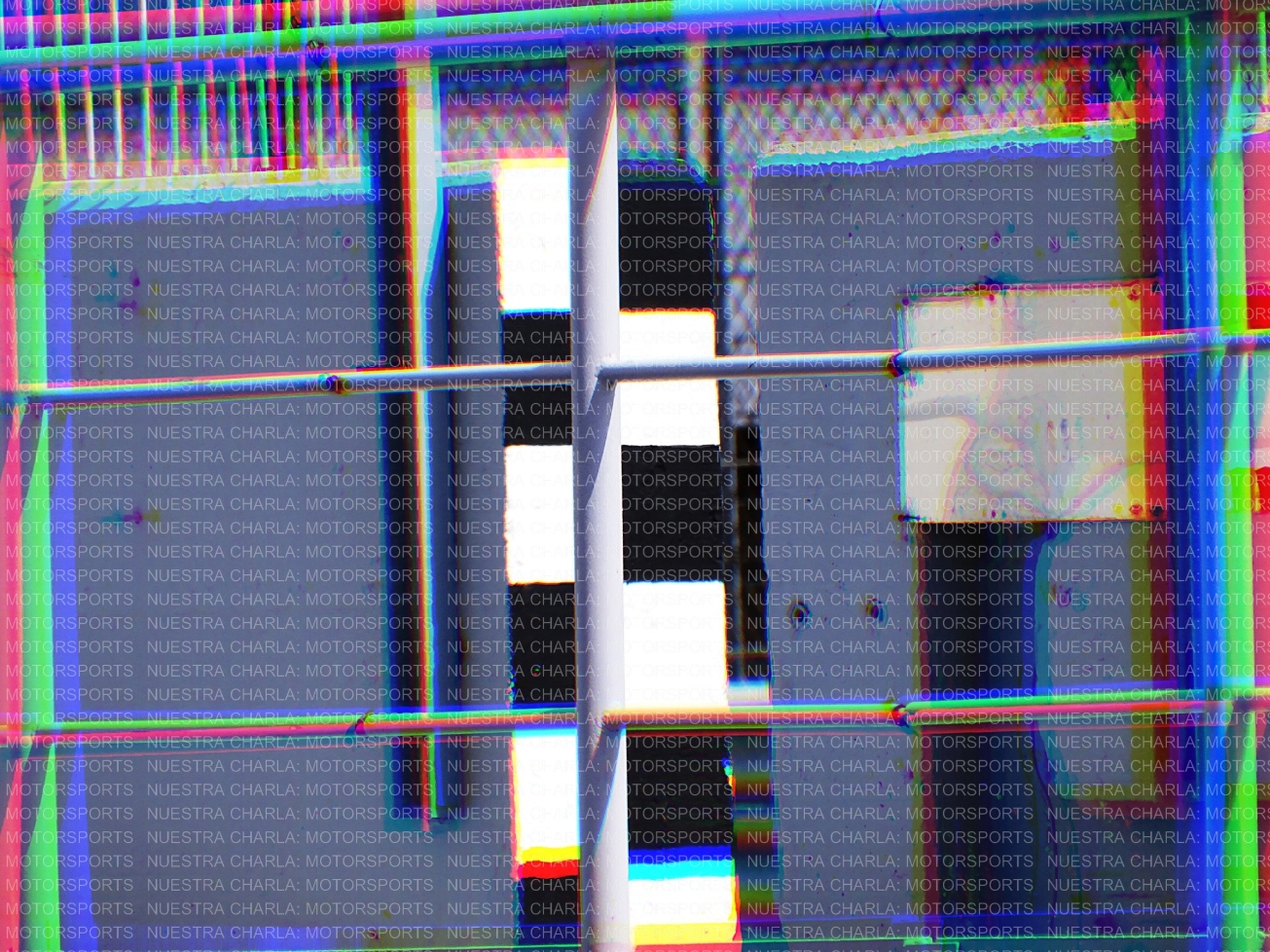 Why? Lemme tell you why.

A long time ago I took an apolitical stance on things, I’m not interested in left/centre/right life model; all I need is to know is lap charts, how they did it, who won, what does top 10 look like, etc.. You get my drift. Going back 20 or 30 years, people would almost certainly hate you if you weren’t interested in the fall of the Berlin wall or God knows what else was popular (trending? LOL! OMG! AMG!) back then. Nirvana? Who remembers this stuff at present? Practically nobody. If you mention it to a 16-year-old infant, they’ll call you a dirty word because they’ll think you’re a non-vegan in-denial-about-global-warming anti-migrant straight fascist, since our youth’s knowledge of general history is based solely on FB, Netflix, Wikipedia and pop counter-culture (these are all actual issues by the way, including counter-culture). Or even worse – you’re a Berlin (the band) fan! Long story short, I don’t care, I don’t follow politics. Suck my balls, mate. Every generation repeats the same path into obscurity, think Macaulay Carson Culkin, Bob Dylan or Charles Baudelaire, even the good ole Nero from pre-Italy; I’ve put together a rather eclectic line-up, I know. From rebel-rebel to sick old men and sociopaths. I’m halfway there myself. Bon Jovi was better than Dylan?

Naturally, my only interest in social media lies – or lay in the past – in the motor racing department (I can’t stress enough how clever Seb Vettel is for not having any kind of “platform” as they call it nowadays, what a legend!). 2020 managed to screw all that.

I never signed up to receive any kind of political brainwashing on social media and yet lately my timeline has been for some strange reason littered with every possible raging mad opinion under the sun despite my various fruitless attempts to meddle with settings based on location and change topics I’m intrested in; I’m told to pray, to riot, to vote, to chop my penis, fly to Mars and so on and so forth. It’s not natural. I only follow motorsport tweeps plus a couple of fairly innocent bots, which means the network is rigged (with PC). Simple as that.

There’s nothing particularly unusual about it because most media groups (and especially dominant industry-leading US-based social networks) come with an agenda, again the same scratched record left/centre/right take-your-pick m-effers. It’s about the money and power, no problem; being rich is not a crime. I perceive this merely as a modern take on Robert Kennedy’s desire to educate and lead the poor masses, the ordinary plebs, the hoi polloi. Throw in a wee bit of populism for good measure.

I staged an innocent social experiment on Twitter: I searched for ‘penis’ and this is what came up. The usual: Trump, Obama, riots, chop the penis. One would’ve expected at least a censored pic of human male reproductive organs, but no! They shall not pass, according to Twitter. I’m resorting to bad penis jokes, I have to sincerely apologize for that – but only to illustrate how ridiculous social media has become. Kids – look away. 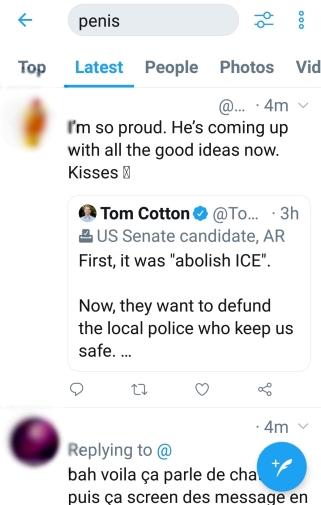 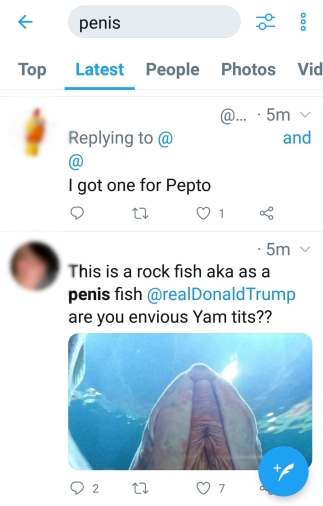 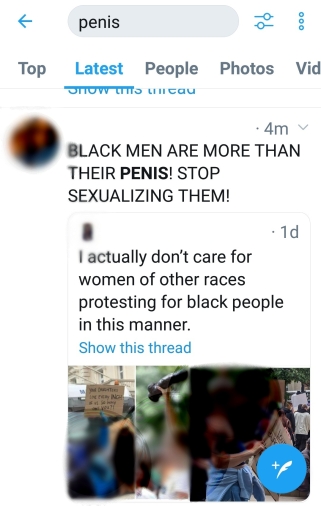 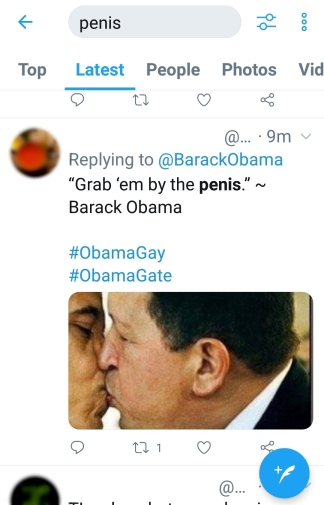 I blurred “normal” accounts’ icons and edited out their Twitter handles just in case, we don’t need legal trouble. Politicians, I’m sure, are OK with daily online abuse, it’s their digital bread and butter, tools of the trade, so to speak.

Someone please tell me how does that make sense? I’m following bloody @F1, @IndyCar and @NASCAR! It should’ve shown me David Marshall Coulthard naked or Kimi-Matias Räikkönen taking a leak on a yacht, whatever those guys, lads, fellas, mates, dudes get up to when they’re drunk. I’ve no interest in personal lives of F1 drivers, neither do I have any desire to receive constant tutoring and learn “invaluable” life lessons from celebrities. Fake wisdom.

So yeah, I don’t want to be a part of the above-mentioned sad phenomenon. All you’ll read from this moment on is weekly ramblings on motor racing instead of regular tweeting, etc., our Twitter handle gets to live another day to tell the tale with no more than automatic links to updates and posts. Once again, we don’t want to offend anybody, let’s be sure the correct campaign message gets across to “voters”. We adore your electric cars, W Series is the best, diversity – bring it on, we approve this message. However, social media is dead.

I’ll leave you with Trevor Moore’s “The Ballad of Billy John” – https://youtu.be/kMbLImbrjgQ Not sure why this guy hasn’t been elected as the President of the World. How about a comedian leading the FIA? We could use some fun ideas right now.

Oh, and I loved the first IndyCar race of 2020. Worth watching the replay, start getting used to the new normal (aeroscreen look).