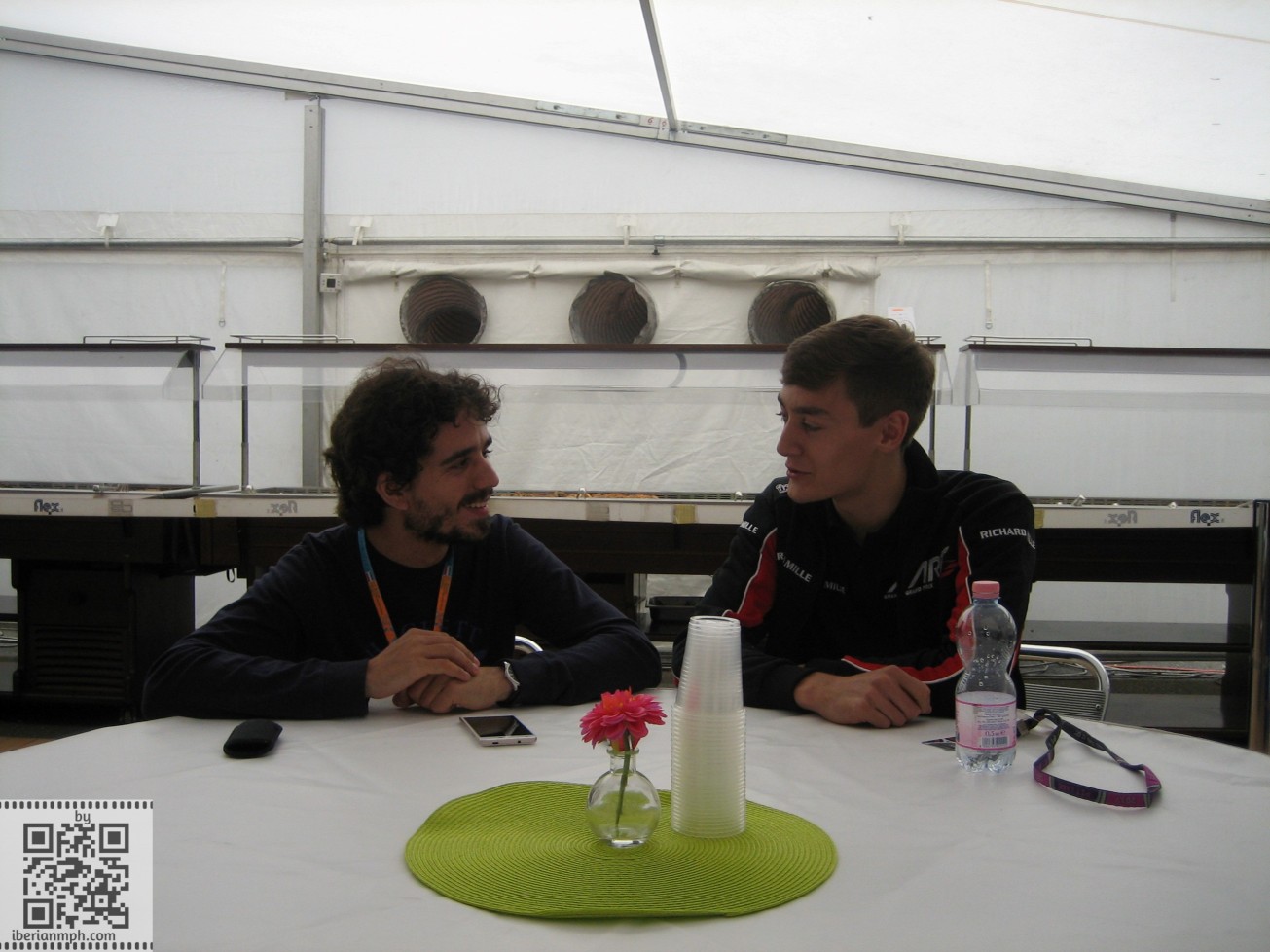 “This is the guy we have to take on,” I was warned in Iberianmph virtual office before I flew to Budapest. And for a good reason: George Russell is the biggest (three-pointed) star of GP3 and Mercedes F1 protégé. We got lucky enough to find him at GP3/F2 hospitality as soon as we landed in the support series paddock on Thursday before the race weekend. Being a youngster fully aware of the importance that public relations have in the Racing world, he was kind to reply to our Q&A with the best of his attention.

Let’s say… an 8. Race 1 in Barcelona was far from perfect to me, but since then we’ve had a very good couple of races: we’ve had two poles, two victories and we are very quick. Now we need to keep improving in the second half of the season to win the championship.

Which aspects do you consider that you need to improve on?

My starts this year have not been very good. In the six races until now, my start has been quite poor in five of them, so this is a key point on which I need to focus. I’ll be looking to not lose too many positions at the starts, so they are the main point.

Maybe those key points have something to do with your adaptation from F3 to GP3?

Yes, sure! Obviously, regarding the starts, in Formula 3 we have a pedal clutch that we operate with the feet. In GP3, you operate the clutch with a paddle on the steering wheel. But now we’ve had many days in the car, we’ve had six races, so this shouldn’t be an issue any more.

From your perspective as a young driver, how do you regard the merging plans between the two categories?

I think it’s important for motorsport to have the sequence F1, F2, F3, and it makes more sense that everything should be on the same race weekend. For me, GP3 this year has made a very good step with the car, with DRS and more downforce. It feels almost how your third year of racing should be. So for me, GP3 is in a good place and it could be in a good position to take over from F3. Nonetheless, another factor for me is that F3 has a lot of heritage, with those airboxes at both sides of the car…  you know, that’s Formula 3. You can look at classic photos of Senna and Schumacher with F3 cars from 20, 30 years ago… I think it is also important not to lose this.

Feeling the G-Russell in Hungary

Feeling the G-Russell in Hungary

In this motorsport ladder, do you miss any rivals that you think they could have progressed through with you?

For sure, in go-karting I raced lots of great drivers: at a time, around 2011, there were six or seven guys whom I’d be Racing against: Verstappen, Ocon, Leclerc… Then you also had drivers like …  Dennis Olsen, Pedro Hiltbrand… Several of these guys would stay in karts a bit longer while I progressed to cars. But I think that all the current drivers deserve to be in the position they are: Esteban, Max, Charles…

What do you feel when you see rivals of your age, like Verstappen or Ocon, racing already in F1?

Always, when I see what they do, I believe that I can also do the same or even better. It’s impressive to see rookies who you’ve been racing against, doing such a good job. I think that, for a lot of years, the older drivers in Formula 1 have not allowed rookies to come in, but now the teams in the junior categories are so good preparing the drivers for Formula 1 that, when they come into, they’re much more ready. Also, Formula 1 teams do their part: in my case a lot of work from Mercedes, trying to make sure that I’m ready with the two-day test, so probably drivers are better prepared now to do the jump.

What do you expect from those two days now?

For sure I’m excited. I’ve done a lot of laps in the simulator, so I know how the car should be, but I think this will be demanding on my body. I’m ready. I have already tested two Formula 1 cars: the first time was the McLaren in 2015, as a prize for winning British F3. Then I tested the 2015 Mercedes in Portimão at the start of the season, which was another great opportunity with Mercedes to get some more Formula 1 experience. 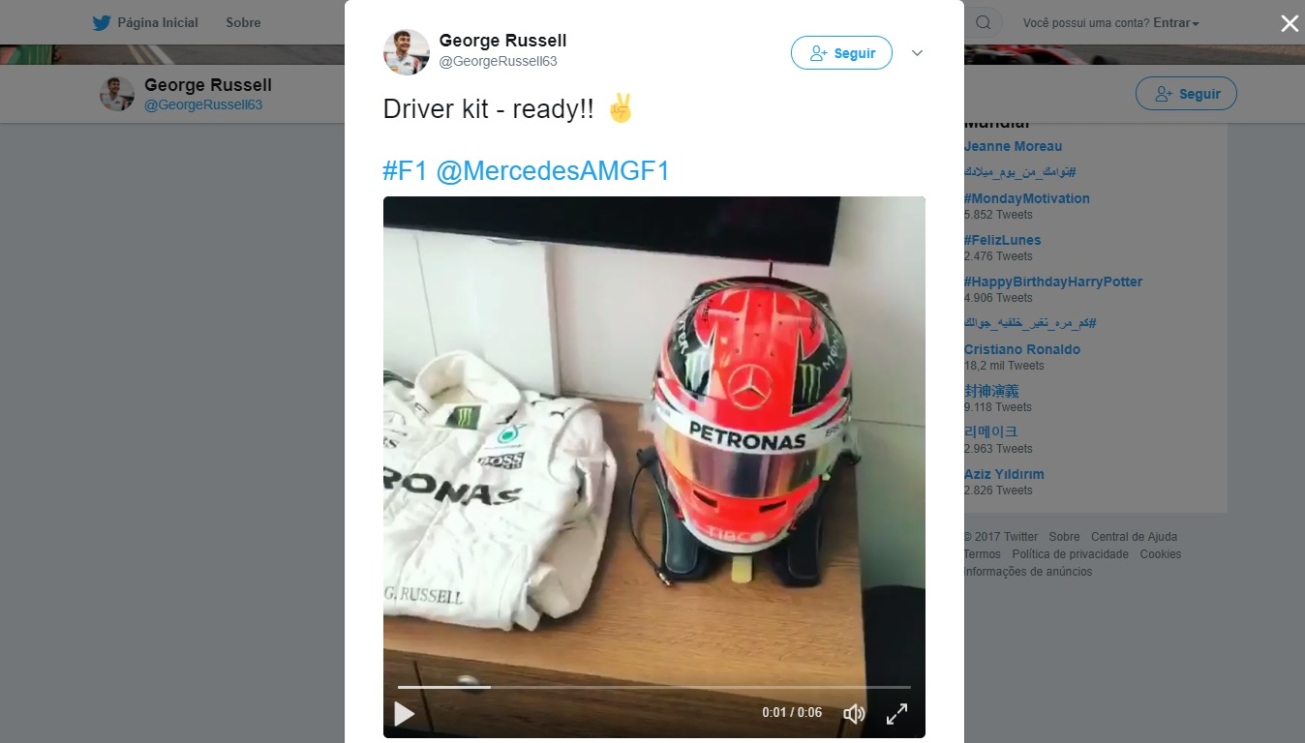 At this stage, I remind him that he shared duties with Nicholas Latifi in Portimão. His brief silence and his expression seem to tell the interviewer: “yes, what to say about that fact, honestly”.

How would you describe your first day in a Formula 1 car, with the McLaren?

The first day in 2015 when I drove the McLaren was unbelievable, because I was racing in Formula Ford and Formula 3 at the time and the step was huge. So to get into an F1 car for one day was an amazing feeling. The when I drove the Mercedes at the start of this year, I knew better what to expect. The first flying lap was still… wow.

Have you trained specifically to the high downforce 2017 F1 car?

Yeah, I have been training really hard since January to be ready if I got the opportunity, focusing really hard on my neck and upper body. I think that it is completely right to say that in F1 your training focuses on the neck. Physically, F1 can be more easy in some ways, but overall more difficult to put it right.

How would you describe your ART team-mates?

They’re very quick to be honest. I think that they all have very different styles. When you watch Nirei Fukuzumi’s onboards, he looks very in control, and then you see his lap time and he’s been astonishingly fast. Probably, he’s one of the most underrated drivers in GP3 and F2 at the moment. Everybody knows that Jack is a super team-mate for me. My driving style? I try to adapt to every situation. To be honest, we all are working well together, which is great to see. At the moment there is a very good atmosphere inside the team.

Do you have any referents in motorsport? Somebody who you admire or who you put as an example?

There’s not one driver, there’s a number of them. For example, I’d take Hamilton’s speed, because he’s always extremely fast. Then Alonso always adapts to the situation, he’s very quick. Jenson Button is very good with media and in front of the camera. I admire a number of drivers for different reasons.

Sadly for George, this wouldn’t be the last time that we found him out in the Support Series hospitality. A mechanical failure at the start of the feature race forced him to watch all the laps beside us. Saturday would not be his best opportunity to show progress with the paddle clutch… Meanwhile, Wheel-to-wheel Racing with closest rival and teammate Jack Aitken did not end well in Sunday’s sprint race.

We go social in Hungary

After the Hungarian round, Aitken has closed on him to a distance of just nine points, thanks to his feature race win and the ‘nil’ on Russell’s part. Time for a good fight to the end in GP3? Or time to forget this weekend with a handful of laps at the wheel of the Mercedes W08?