We continue to explore the wonderful world of GP3 racing, this time with Conor Daly.

Q: You were able to test both Formula 3 and GP3 machinery recently, how do they compare?

Conor Daly: The F3 car is lighter and more nimble but has a lot less horsepower. It is a fun car to drive for sure! GP3 car is heavier but faster and is a bigger car overall.

Q: Regarding Estoril test, what do you make of the circuit?

CD: I really enjoy the Estoril circuit! I think it is a very technical track that rewards drivers who know it the best. Most of the time I found during the two day test was in a few line adjustments on track and adjusting my driving in a few corners. The track is also physically demanding which is always good!

Q: We saw quite a lot of marbles on the track in Estoril, how were the tires behaving?

CD: I thought the tires were performing quite well for the amount of stress the track puts them through. On long race runs the tires did not go off as much as I thought they would.

Q: In F1 they like to mention ‘circus’; in MotoGP people talk about ‘family’, but how would you describe the atmosphere in GP3?

CD: GP3 is a very competitive atmosphere because we race on the same weekends as Formula 1 so every young driver wants to prove themselves. The drivers respect each other but I wouldn’t quite say it’s a ‘family’ environment. I enjoyed competing in GP3 my first season and really hope to have a second season this year!

Q: Racing in Europe and USA – what are the main differences? Where do you see yourself in the future?

Q: We often hear about motivation in motor racing, what motivates you?

CD: I love everything about racing, it’s in my blood. The feeling you get when you’re on the edge going as fast as possible and getting rewarded with a win or a pole position, there is nothing like it. The accomplishment of getting a good result, winning a race, is so incredible! 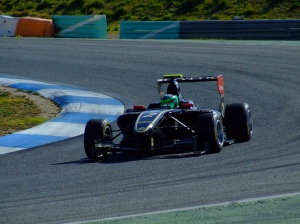